The importance of having your chimney swept

Chimney sweeps – apparently a harbinger of good luck at a wedding and the employment of unfortunate children in Victorian times.

Nowadays, having your chimney swept by a professional is an important part of the regular maintenance of your chimney or flue.

Why do I need my chimney swept? 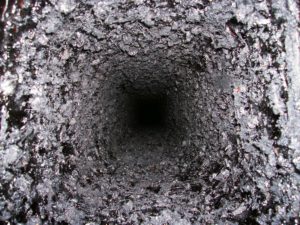 Chimneys need to allow the free passage of hot flue gasses containing dangerous chemicals into the atmosphere at a higher elevation.  Regular sweeping will remove soot, birds’ nests, cobwebs and any other blockages.  It also removes creosote, which will help to prevent chimney fires. This picture shows a very dirty, tarred up flue.

Your chimney stills needs to be swept even if you have had it lined.  A build-up of soot or residue within a flue will reduce the cross-sectional area which will have an adverse effect on the draw of the fire or efficiency of the wood burning stove that you are using.

Birds – especially jackdaws love to make nests in unguarded flues during the spring and summer months.  The nest building process will probably partially block the flue and definitely involve small bits of combustible material like straw and twigs being dropped into the flue.

It is normally possible to fit an anti-bird cowl (see picture of a cowl opposite) to prevent this happening; however, some homeowners don’t like the look of them or find that it is prohibitively expensive to have them fitted. 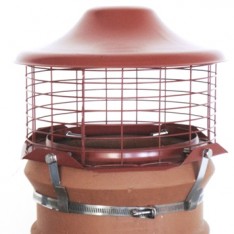 For homeowners using a flue without an anti-bird cowl it is vital that sweeping is carried out in the early autumn, just prior to the fire being used.

One of the most common times for chimney fires is in the spring, when during an early warm spell homeowners stop using their fires and the birds move in and start nest building. This may be followed by an unanticipated cold spell in April when fires are lit again.  Any nesting materials within the flue are likely to cause a chimney fire which can have devastating consequences.

What about gas fires?

Any blockage in a gas flue could cause carbon monoxide poisoning.  Whilst gas flues are often smaller and do not attract the attention of birds for example, it is not unusual for something as small as a spiders web to cause a significant blockage. It is therefore important that gas flues are swept at least once a year.

How often should I have my chimney swept?

How often you have your chimney swept will depend on a number of factors which include the type of flue used, appliance, duration of use, moisture content of wood fuel and the type of chimney you have.  Your chimney sweep will be able to advise on the sweeping frequency that is right for you during the appointment.

It is recommended that you have your chimney swept at the following intervals for the different fuel types shown:

What do I look for in a Chimney Sweep?

A good chimney sweep will hopefully be recommended to you by word of mouth.  It is definitely worth asking your neighbours with fires who they use.

You should expect your sweep to be well trained, and have the right tools.  Generally, sweeping is an untidy job and a good sweep will be trained to make every effort to ensure that none of the materials that come down from the flue escape into your home.

You should ensure that your sweep has adequate insurance to cover any accidental damage whilst at your property.  It is always worth removing any valuable items from the mantelpiece just in case.

Finally, your sweep should leave you with a proof of sweeping that is dated and signed.

If you would like to find out more about chimneys and flues please contact us at info@turnerbaker.co.uk or call on 01432 839123.